Distinguishing Acupuncture From Acupressure
Acupuncture and acupressure are different applications of the same Traditional Chinese Medicine (TCM) principles. In both, the practitioner evaluates and assesses the animal’s current condition, then decides on an appropriate course of action. The action, or session plan, will include the stimulation of specific acupoints to help bring the animal back to a state of balance and self–healing. Acupuncture is carried out by inserting thin needles into the acupoints. Acupressure is performed by using finger pressure on the points. Treating acupoints with either acupuncture or acupressure has the same effect in restoring balance to the animal.

Why Are Only Veterinarians Allowed to Perform Acupuncture?
Because acupuncture is invasive, only veterinarians trained in acupuncture can apply the needles used in a treatment. With needle penetration comes the risk of infection or other bodily injury, making this modality inappropriate for lay people to use. Even a licensed human acupuncturist cannot legally practice acupuncture on an animal.
Is Acupressure Effective For An Animal?
Acupressure is a non–invasive modality that uses the same TCM principles, and provides the same energetic qualities, as acupuncture, with none of the possible ill effects. Acupressure can be used to treat almost any condition that can be treated with acupuncture. Its intention is preventive, offering the client a way to keep imbalances from occurring in the first place.

How many points are stimulated during a typical acupressure session?
Generally the practitioner will complete the Four Examinations, create a session plan, and use four to ten points per session on the animal. The points are most often worked bilaterally. The practitioner will keep notes as to which points were used per session and use that information, the animal’s response and observed changes, plus further assessment, to determine the acupoints to be used in subsequent sessions.

How much pressure is appropriate?
The best way to feel the pressure used is to place your thumb gently on your closed eye lid and exert a minimal amount of pressure, you’ll get the idea quickly. About one pound of pressure is a good measure of the amount needed. It’s easy to see from this description that the amount of pressure used is very light. The life force or Chi energy of animals is most often accessible and available on the surface of the body; take care not to ‘offend’ or over–stimulate them. However, often an animal will lean into the pressure, thus choosing to increase it.

How long to touch one point?
This is where you get the chance to tune into your animal! There is no set amount of time to activate a point; generally the animal will advise you when work is complete on the point. They will let you know this by moving into a point, moving away from a point, yawning, chewing, relaxing, panting, stopping panting, etc. A rule of thumb is about 15 to 45 seconds.

Does it hurt?
Acupressure most often does not hurt. That said, there are times when a point will have ‘too much’ energy and it can be briefly painful or uncomfortable when stimulated. Always keep yourself in a ‘safe’ position when working on an animal, stay out of biting distance for a small animal and maintain horse–safe body positions when working on a horse. This is particularly so for horses who have not had body work in the past.

How long is a session?
That is often left up to the animal. The session can be 20 minutes long or an hour long. Typically the first session, including intake and assessment, will take one to one and a half hours. Follow–up sessions are often shorter and may last 25 to 45 minutes.

Should you work the points on both sides?
This depends on the animal and the condition. If there is an injury on one side, it is often best to work points on the opposite side only; opening the energy on one side will help the opposite side without annoying or causing discomfort to the animal. Also, there are specific point combinations that are worked as bilateral pairs.

How often can or should acupressure be applied?
A full session once every third day is a good rule of thumb. Chi energy takes 24 hours to circulate through the body and waiting longer between sessions gives time for the energy to cycle through the body and begin the balancing process. Don’t be surprised if you see immediate changes as well. Be aware that when balancing the body, one issue may be relieved and another may appear – it’s the onion layers! Most clients will be comfortable with a weekly or every two week session unless there is a specific current issue.

Can acupressure be used soon before or after exercise?
Generally the animal should be in a rested state, and have time to process the session before working. Animals should not be worked on if they have just eaten, just exercised, just bred or been bred, or are pregnant.

What if the animal feels worse after a session?
This is known as a healing crisis; it can occur as energy blockages are released. This is also why a practitioner will limit the number of points worked per session, as too much energy can be affected. On an older or sick animal, generally fewer points should be used than on a younger and healthier animal.

What Acupressure CAN Do:

What Acupressure CANNOT Do:

"It is by virtue of the 12 meridians that animal life exists, that diseases arises, that animals can be treated and illness cured. The meridians are where beginners start and masters end". Spiritual Pivot, Chapter 17.

The acupressure practitioner uses light finger pressure on the acupressure points (also called acupoints) along the meridians. The meridians give specific places to access and influence the internal functioning of the animal’s body. Acupressure helps to improve the quality of life in elderly dogs suffering from hip dysplasia, arthritis, as well as every day aches and pains. At the same time, it can calm a new puppy and help ease the transition period when the puppy is brought into a new home. Although acupressure is commonly used to relieve pain and discomfort, this ancient art has many more benefits which include: 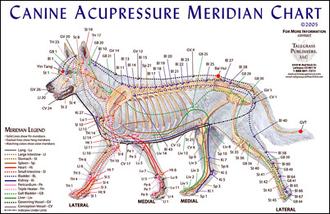 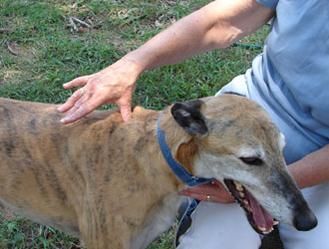 Acupressure (finger pressure), like acupuncture (uses needles), is based on Traditional Chinese Medicine. The so called meridians, channels, in which the Chi (life-force energy) and blood of the animal body circulate, run on the surface of the body and are connected with tissues and internally with the organs, moving the energy, balancing the Chi, which is transporting strength, nourishment, and healing properties, relieving or preventing blockages and excesses that can cause discomfort, pain, and disease. 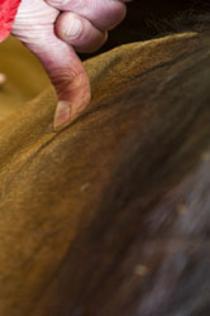